One Nation Under God

On this day, the 11th anniversary of the wort terrorist attack on American soil, we remember & honor so many…the innocent, who never had a chance; the brave, who did not run away, but ran INTO the horrible danger; the families who waited for their loved ones to come home, but they never arrived; the survivors, who feel blessed to have made it out; the rest of America who watched in shock, feeling first helpless, terribly sad for all, showing compassionate beyond belief, and then extreme anger that any terrorist would go to such a low level of inhumanity to show America is penetrable. We weren’t Republicans or Democrats; we were Americans.

Our lives have been changed forever. Our babies & young children were oblivious on the day, but they are now learning about it and seeing the video footage at an age that they can begin to understand. I had a 2 year old and a 2 month old baby. They are shocked to see & listen to these news programs, but they are learning about what will be their American history.

There have been 14 attempted attacks in NYC alone since 9/11/01. Isn’t that incredible? Incredible in both the facts that more terrorists come, and our brave men & women in so many various positions, are able to thwart 14 attempted attacks, and make them, just that-attempted. Thank God!!

In the not-so-distant future, our children will be the adults of America…the working professionals, the emergency response crew, the military service men & women, the stay at home moms who stay home & raise kids while their husbands go out to do these jobs. We have the obligation & responsibility of educating our children now about the current world around them, what has happened in the past & what led up to that point. Public school teachers have their hands tied, and can only teach to what is covered on a state standardized test. These kids, our kids, are not learning the true fundamentals that are so integral for our future leaders of America. It is up to us. Pretty simple, huh?!!

In decades to come, 9/11 will be treated like we treat Pearl Harbor. It is a date on the calendar. That was an attack on America. Those sailors & their families certainly remember those terrifying times. But the rest of us do not give this attack the tribute it still deserves. Every attack on America-nattive & abroad-should be honored & tribute paid. Don’t forget all of those families who are in the shadows, now & in the future.

America is in a different place on many issues since 9/11/01. We have a national debt of $16 TRILLION. We’ve got an unbelievably bad housing market, unemployment, and people living on goverment funds. Our Presidential election is just under 2 months away. But I respect both President Obama & Governor Romney for pausing their negative campaigns for the day. It hopefully reminds us that at the end of the day, we are: 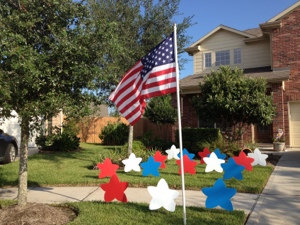 Learn More About Our Services! Send Us A Brief Message…

Lindsay Stahl Groenewald
2020-04-02T02:25:42+0000
Thank you so much for the beautiful surprise. Our front yard looked amazing and our 4 year old was beyond excited! It... made her birthday so much brighter!!read more